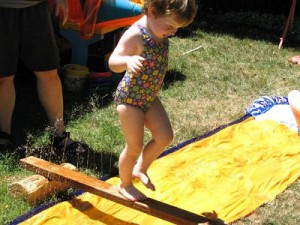 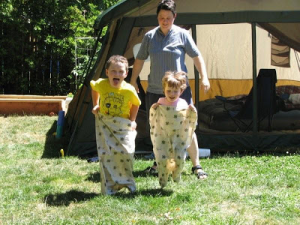 This past weekend we set up the tent and had a camping adventure right in our own backyard. While we did not manage to sleep outside as a family, we still had loads of fun! (Night #1: Boy Wonder could not sleep with the neighborhood noises still happening, so he and I went in while Partner and the Princess slept outside. Night #2: Neither child could calm down enough to sleep outside, but were out within minutes once we retreated to their own bedrooms.)

As a fun thing to do, I bought a bunch of inexpensive party prizes, plus a few large water blasters as “end of the game” bonus prizes, and set up a bunch of “camping” games. We had an adventure trail, complete with a stop where we saw a snake and had to balance on one foot for the count of 10 before proceeding, an obstacle course, a river crossing that looked remarkably like a slip-n-slide, two fishing holes and a treasure dig (prizes in the sandbox). We also did a 3-legged race (I agreed to hop on one foot so they would have someone to compete with), a potato sack race, a knock the cups down with a ball game, and a game I made up called “Bugs and Bats” (Boy Wonder wanted to be able to imitate a bat…so I went with it.) that allowed the kids to move forward a certain number of spaces based on whether the bug named crawls or flies, with bats thrown in occasionally for fun.

Insider advice and insights to help you decide if you should pursue a higher degree while raising children, and tips for being successful if you're already on that path, from a woman who graduated from law school in her early 40's while working full-time and helping raise two young children. While most of the blog posts were originally written several years ago, they have recently been sorted for the most relevant materials, and new content is being added.